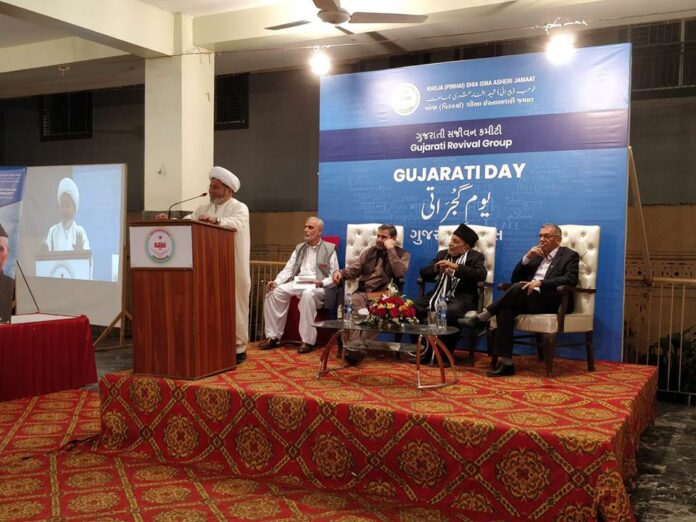 The first Gujarati Revival Day has been held, for the purpose of promoting widespread usage of the Gujarati language.

The Gujarati Revival Group under KPSIAJ organised the first Gujarati Day on 27 February. The event was an effort to discuss the revival of the Gujarati language and was highly appreciated by community members, who considered it the first step towards saving their mother tongue.

Br. Ramzan Merchant, the host for the night, described how Gujarati is facing an uncertain future in our community. In particular, its written form is in an alarming state. Although a living and vibrant language in India, Gujarati is suffering from apparent indifference from the people who speak it as their native language in Pakistan.

The number of Gujarati speakers in Pakistan is declining fast due to very limited usage. Even those who do so, speak it strictly within the family or community only, and most of them cannot read the Gujarati script. As for the current young generation, although many can understand Gujarati they feel hesitant in speaking it and there is a dire need to encourage them to speak, at least at home.

Sheikh Shabbir Maisami opened his speech with a verse of Surah Hujraat. He then stated that it was due to negligence that Gujarati was in such a state, and that if efforts for revival were not taken the language could be lost within two decades.

Br. Mussadiq Lakhani spoke to why the younger generation should adopt the Gujarati language. He said that Gujarati had a rich history complete with the community’s cultural and educational treasures, which were only accessible by adopting Gujarati. He also praised the work of Allama Haji Naji towards promoting the language.

Dr. Sibtain, in an audio message, described how we can encourage the new generation towards the Gujarati mother language. He pointed out how when babies are born, they can hear, process and understand all the sounds in all languages, and it is at this stage that children essentially learn how the sounds in a language go together to make meaning. This is the time, therefore, to encourage people to understand Gujarati.

Mr. Iqbal Noorani explained how having a mother tongue was a blessing for the community but it had not been properly protected, and he praised the work of the KPSIAJ Gujarati Revival Group.

Khojas invite in the neighbours