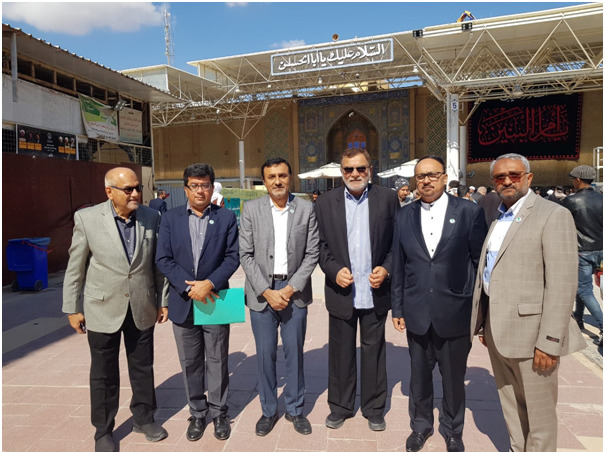 An AFED delegation has enjoyed a fruitful and educational visit to the holy city of Najaf e Ashraf, including a discussion with his eminence, Marja-e-Taqleed, Ayatollah al Uzma al Seyyid Ali Hussainy al Sistani (May Allah (SWT) prolong his life, grant him good health and protect him against all calamities, Ameen).

The visit was organized by the Federation of KSI Jamaats of Africa (AFED) and took place on 19 February.

Praise for the Khoja community

At the audience and discussion with Ayatollah al Seyyid Ali al Sistani, Shabir Bhai Najafi provided a brief summary of the activities of the Africa Federation and the various projects being initiated and undertaken by AFED in Africa, including the Tabligh activities.

Shabir Bhai informed Agha about the forthcoming AFED Supreme Council Triennial Conference in April 2019 in Mombasa and a full message from Agha will be conveyed during the Conference. Shabir Bhai also mentioned that his Eminence’s Marjae’aat has brought about strong unity amongst the Shia community and prayed for his good health and long life.

Earlier, the AFED delegation met with Agha’s son Seyyid Mohamadraza al Sistani during which several administrative matters were discussed and agreed upon.

The AFED delegation also visited the Holy Shrines of our Imams (AS), Imam’s progenies, Martyrs of Karbala and of the faithful companions of the Holy Prophet of Islam and of our Masumeen (AS) in Najaf, Kufa, Karbala, Samarrah, Kazmain and the other peripheral Ziyarats. May Allah (SWT) accept the Aamals, Duas and Ziyarats of all our Muslim Ummah – The lovers of Ahlulbayt (AS) – Ameen.

AFED OBs wishes to record special thanks to Sheikh Haniphe for organizing the meeting and for the translation of the discussions.