The first of its kind, much-anticipated NASIMCO Shia Matchmaking Event has provided a platform for singles in the Khoja community to meet, in an Islamic and confidential manner, to find suitable life partners.

Sessions included topics such as “What to Look for in a Potential Spouse” and “The Role of Parents/In-laws in Marriage Relationships.”

Volunteers from the UK

Sis. Rehana Ismail and her team of six volunteers from the Birmingham Matchmakers’ Forum came from the UK to assist in facilitating the weekend following the success of three such events held by the Birmingham Jamaat.

The idea of bringing their success and expertise to Toronto was introduced by Sis. Kulsum Dharamshi, former Secretary General, NASIMCO, supported by former president of NASIMCO, Br. Razak Damani. The team in Toronto consisted of 19 volunteers led by Sis. Kulsum Dharamshi.  All volunteers had a mandatory training prior to the event, with an emphasis on maintaining confidentiality.

Held at the Al Mahdi Islamic Centre in Thornhill, Ontario, the program on the weekend of 27-28 July began with the recitation of the Holy Quran by Br. Hasnain Panjwani followed by a welcome address by Br. Gulamabbas Najafi, Vice President, NASIMCO.

Due to the high demand for such an event, there was an overwhelming number of registrants, with a waiting list for the sisters on Saturday. The overall number of attendees over the weekend totalled 160.  Some registrants had travelled from as far as Vancouver, Brazil, United Kingdom and many from the United States.

Some of the comments from attendees were:

“Very well organized.  It has been a great event.  The facilitators and volunteers were very humble.  I did not expect the program to be so smooth.  It passed over my expectations and looks like we need to have at least two or three of these types of programs every year.  My hats off to you all.”

“Thank you for taking the first step, its encouraging to note that this is a step in the right direction.”

“Overall, I was very impressed and happy with the organization of the event and I wanted to say thank you for providing such an opportunity.” 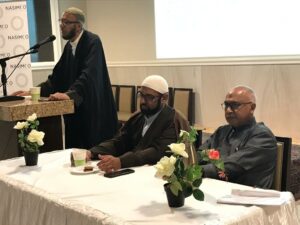 During the Saturday program, parents and guests were invited to have their own separate program with Sh. Hasanayn Kassamali and Sh. Jaffer H. Jaffer. Topics such as “What to Look for in a Potential Spouse”; “Trust in Allah (SWT)” and “The Role of Parents/In-laws in Marriage Relationships” were covered. There was also time for a Q & A session which touched on many other important aspects of the matchmaking process. On Sunday, Maulana Sayyid Muhammad Rizvi addressed the attendees.

Overall the event was very well received. NASIMCO has received many requests to provide more of such events.  If you are interested in attending the upcoming event, please subscribe to www.nasimco.org to receive notice of the date and location for the next event.

Organisers would like to thank all the volunteers for their dedication and time.  Also, many thanks to the donors who made this event possible. May Allah SWT reward you all abundantly, Ameen.