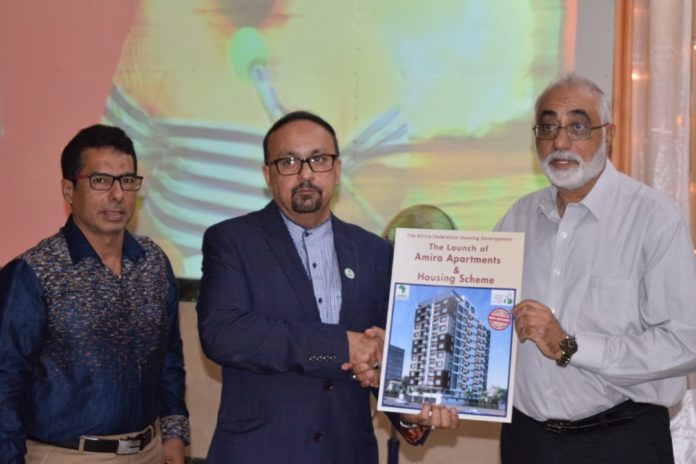 Forty apartments will be available to first-time buyers under a Rent-to-Own housing scheme launched by Africa Federation (AFED) in collaboration with the KSI Jamaat of Dar-es-Salaam.

The Amira Apartments scheme is for resident members of Dar-es-Salaam Jamaat. Under the “Rent-to-Own” scheme, residents pay a deposit then the rest of the cost of the apartment is paid monthly as rental over 12 years. Once fully paid, the renter becomes the owner of the apartment. There is also a “Direct Sale” scheme based on a 12-month plan.

The launch of the Amira Apartments marks another step in the economic development of the city, underpinned by a commitment from AFED Housing Development Board to facilitate good, reasonably priced homes for middle-income earners of member Jamaats in Africa.

The project consists of 20 four-bedroom apartments and 20 three-bedroom apartments, all with a spacious terrace, fresh water tanks, air conditioners in every room, hardwood kitchen cabinets with granite tops and a car park.

The Housing Development Board recommends all those who wish to become first-time “Home Owners” to apply before the deadline of 28 February 2019.

The Amira Apartments are AFED’s second Rent-to-Own scheme. They align with the Vision of the Chairman of the Africa Federation, Alhaj Shabir bhai Najafi, who has provided untiring support and guidance to the AFED Housing Development Board.

At the launch on 19 January, he emphasised the importance of families owning homes and said “Rent to Own” was a unique scheme which had been adopted by Africa Federation and is a model for other Khoja Jamaats. He called upon Dar-es-Salaam members to “take this rare opportunity of becoming home owners, which secures a family’s future.”

Backbone of the project

The Chairman of the Board, Alhaj Akil Hirji has conveyed appreciation to the development’s main supporter, Alhaj Ahmedbhai Daya, a World Federation Executive Councillor.

He described Mr Daya as: “The backbone of the housing project for his concerted efforts to solicit funds for the purchase of the plot and for the construction of this building,” and added: “This housing development project is pivotal towards the economic growth and sustainability of the community, housing being one of the crucial elements for long-term development.”

The Amira Apartments follow the launch last year of the Board’s first Rent-to-Own housing scheme in Dar-es-Salaam, the Al Asghery Residency. The AFED Chairman also assured members that the Jamaat’s Uhuru Street Housing Project will take off soon following the completion of administrative work and documentation, which is being handled by the AFED Housing Board.

On the Frontline – An account of a Khoja Doctor from Milton Keynes fighting...

If you are a Khoja female looking for an education loan, here’s a good...