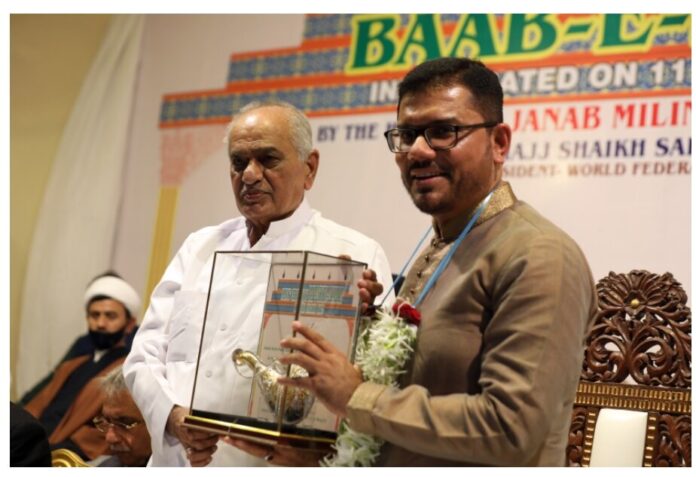 India gets its first-ever gate, “Baab-e-Shohda-e-Karbala”, dedicated to the Martyrs of Karbala in Dongri, Mumbai, the hub of all Shia gatherings.

Hazrat Abbas (as) Street in Dongri that houses the Khoja Shia Isnashari Jamaat and its Jama Masjid has added another spectacular structure to its locale; The Baab-e-Shohda-e-Karbala, inaugurated on 18th October 2021, stands mightily at the entrance of the street. 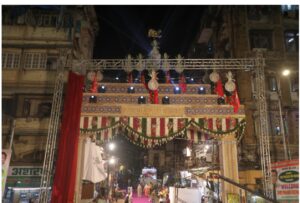 How did the Baab-e-Shohda-e-Karbala come about?

The construction of the gate has been a long journey involving the efforts of the locals, Mumbai Jamaat President Al-Hajj Safdar Karmali and the Member of Legislative Assembly (MLA) of the area, Mr Amin Patel.

In an interview with the local newspaper, Mr Amin Patel mentioned that “The locals have been demanding for long to have a gate at the mouth of this (Hazrat Abbas (as)) street… We wanted a structure that could last centuries and also become an important landmark on Mumbai’s pilgrimage-tourism map.”

It is noteworthy to mention here that besides this structure, Al-Hajj Safdar Karmali has played a significant role in the renaming of Samuel Street as Hazrat Abbas (as) Street, Dongri Char Null as Hazrat Imam Husain (as) Chowk, Jail Road East as Sayyada Fatima Zahra (sa) Marg and the Intersection of Hazrat Abbas (as) Street and Ismaili Jamatkhana as Maula Ali (as) Chowk. 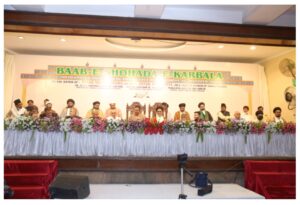 The inauguration ceremony of the Baab-e-Shohda-e-Karbala took place on 18th October 2021 followed by a function at Kesar Baug Hall. The President of The World Federation – Al-Hajj Safder Jaffer was the Chief Guest for the ceremony. Mr Amin Patel, Haji Mukhtar Varteji – President of India Federation, Council of all KSI Jamat and Al-Hajj Gulamali Ismail Virjee (Suku Suku) were invited as the Guests of Honour and Maulana Ahmedali Abedi – Imam-e-Jummah, was also present. Prominent ulama of Mumbai were also invited. 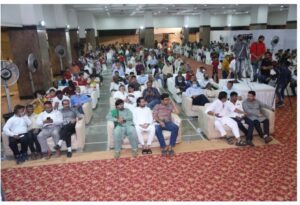 An invite for the ceremony was circulated among the community members who attended in the event in great numbers. Provisions were also made for a live telecast of the ceremony through KSIJ Mumbai’s official YouTube page. The video can be viewed here.

The gate is a blend of Persian and Mughal styles of architecture and is about 28 feet high and 31.5 feet wide. The gate is made up of hand-carved yellow Jaisalmer stones, Italian marble blue stones and the mother of pearls which collectively give the structure a majestic look and will last for over 200 years, according to Aadil Shakir Lokhandwala and Haque Abdul Mohammed, the architects of the gate.

A significant contribution towards the construction of the gate was made by Mr Amin Patel, through his MLA funds.

Reaction from the Community Members

Mirroring the sentiments of numerous Shias, Al-Hajj Safdar Karmali mentioned that, “This street has always been associated with the Shia sentiments because of the Jamaat, Jama Masjid, the Imambada and Mehfil-e-Shah-e-Khorasan, another sacred Shia site (and) in the next lane is Kesar Baug, which sees a huge crowd of mourners in Muharram. I am glad that this gate has come up here.”

Not only the Shias, but also the Sunnis (members of Ahl Sunnah community) are zealous about the gate. “Every Muslim, Shia or Sunni is emotionally attached with Imam Hussain and his family members who suffered so much at the hands of Yazid and his army. This gate will serve as a tribute to the martyrs and keep reminding us of the truthful path Imam Hussain showed. He fought for justice and peace and the gate will remind us of all those principles.” said senior Sunni cleric and spiritual leader Maulana Moin Ashraf Quradri (Moin Mian) (-extracted from his interview from the Times of India)

Extract from The Times of India, 19th October 2021 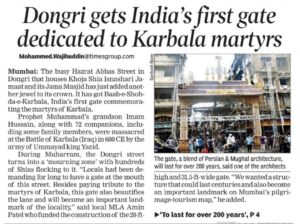 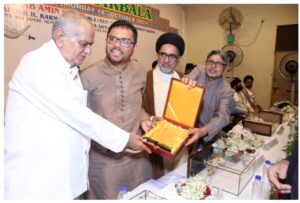 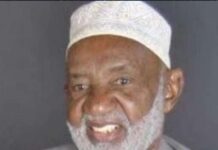 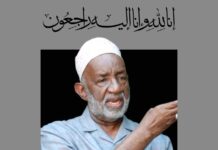 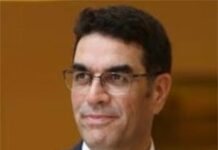