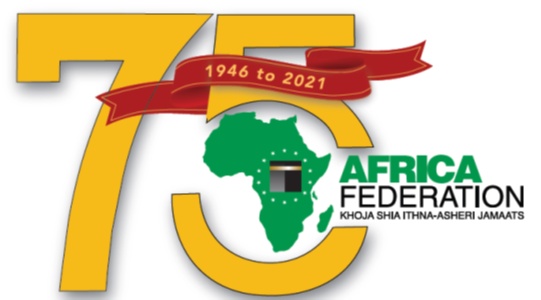 The Federation of Khoja Shia Ithna-Asheri Jamaats of Africa celebrates 75 Years since it was established in 1946. The Secretariat is looking into organizing certain events and programs to mark this historical milestone.

To mark this long journey of challenges, resilience, sacrifices, determination and achievements, the Africa Federation Secretariat has produced a special Logo (seen below) to reflect this momentous historical landmark. Henceforth, the Logo depicting the 75 Years of the establishment of Africa Federation will be used side by side with the Africa Federation’s traditional Logo until the next Conference which is scheduled for the year 2022.

Brief History of the Establishment of AFED:

In the year 1945, some passionate intellectuals and leading personalities of the community in East Africa, met for the first time to discuss ways and means to foster broad unity in the community and how to inaugurate an association that would include all East African Jamaats. During this meeting it was agreed to meet again after a year to set up the operation of the proposed association with proper rules and regulations by way of a constitution.

As a result, the first ever Constitutional Conference of the Khoja Shia Ithna Asheri Jamaats was held at Dar es Salaam in 1946. The Conference was attended by Jamaats’ delegations from Kenya, Uganda, Tanganyika and Zanzibar and Alhaj Murabbi Alhaj Abdulhussein Nurmohamed was elected as the first Chairman of the Federation.

With the success that the centralized Federation was enjoying, other Khoja brethren living in Congo, Rwanda, Burundi, Madagascar, Reunion, Mauritius, Mozambique and Somalia were also attracted and the Jamaats there also became members of Federation thereby widening the unity under the helm of the Africa Federation. Today the Federation has the membership of 26 Jamaats in mainland Africa and additionally 2 Territorial Councils in the Indian Ocean Ilands of Madagascar (CROI) and Reunion (UAKSIR) consisting of 18 Jamaats making a total of 46 Jamaats with about 21,000 members.

Below are historic photographs from our Archives Section taken from the 1st Conference held in 1946 in the front section of the Dar-es-Salaam Imambargha where the Africa Federation came into establishment.

Ever since it was formed, the Africa Federation has held its Supreme Council sessions every year and the Conferences once every three years as required under the Constitution. These meetings have provided opportunities for members of the community to meet and discuss the pressing concerns of various Jamaats and also deliberate and guide on social, economic, health and educational issues which have become the focus of great interest of the community at large. 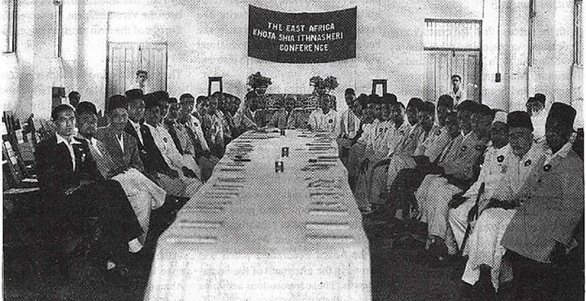 The Africa Federation has come a long way since 1946 in all spheres of activities which lately includes capital investments projects that are geared towards ensuring income generation to enhance the development for the benefit of members in the Jamaats under the Africa Federation.

The Africa Federation activities are undertaken by the various Boards under its umbrella which have important functions to carry out various programs and activities in their specific fields for the benefit of members of the Community.

The Boards that are currently functioning under the Federation are as follows:

As we mark the 75th Anniversary, it is our honorable duty to aptly remember and appreciate the long vision and foresight of the pioneers – the visionary elders of our Community who left us with the rich heritage of unity, brotherhood and harmony between the Jamaats of our Community, that has enabled us to grow to the pinnacle in leaps and bounds over the past seven and half decades.

What is even more heartening, as it happened, is that the example of the success of the Africa Federation as the first Federation in the community, in the context of an institutional regional unity, the former leaders of the Africa Federation became instrumental in the establishment of yet another federation known as the World Federation which in turn served as an inspiration for emulation by the communities in other parts of the world leading to establishment of other Regional Federations. Such an enlightened vision and achievement of institutionalized unity as a vehicle for progress proved the Khoja Shia Ithna-Asheri Community as a vibrant global community.

As we are celebrating the 75 Years of existence, we stand proud today of maintaining the rich heritage and unity of our Community in Africa. It befits a thousand salutes to the pioneers for their wisdom, perseverance and courage to bring to us this incomparable and distinguished Institution – the Federation of Unity, Prosperity and Progress. May Allah (SWT) grant us the tawfeeqat to continue with the same motto and inspiration to take the Federation to even higher level of Unity, Prosperity and Progress, Ameen.

We pray to Allah (SWT) to reward amply all the past visionary pioneers, leaders and volunteers of the Africa Federation for their devoted services to the community. Similarly, we pray to Allah (SWT) by His infinite grace and mercy to grant the current leaders and all volunteers long life with good health, longevity and more success in the services to the institutions and community at large.

A request for a Sura-e-Fateha for our pioneers, past leaders, volunteers who are no longer with us and all the Marhumeen.

Messages of congratulations etc. can be sent to: secretariat@africafederation.org