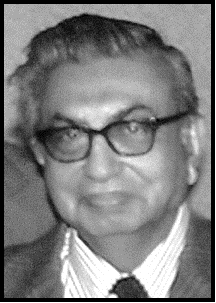 Alhaj Mohammed Jaffer Nasser Virjee was born in Mwanza on 26th June 1922.  He was the youngest son of Haji Nasser Virjee and Khatijabai Gulamhussein Mamdani.

He received his primary education in Mwanza and secondary in Mombasa. He acquired excellent results in his Cambridge Examinations and was set to go for further studies but unfortunately, was required to join the family business (Mwanza Cotton Trading Company) at a tender age of 18 in the year 1940.  He worked hard and developed into an excellent businessman in trading, industry and marketing.

Mohammed Jaffer Bhai was director of not only Mwanza Cotton Trading Company and Jaffer & Virjee Insurance, but also a number of other organizations namely, United Stationers & Printers and Msumari Ltd all in Mwanza.

His political competence was very well recognised. Mohammed Jaffer Bhai was member of local TANU party and after Tanganyika got Independence, party nominated him to become a Member of Parliament. Due to family commitments, he could not take up the position. He served as a nominated member of Mwanza Town Council and the Vice-Chairman of Mwanza Chamber of Commerce.  He was also member at East African Posts & Telecommunications and BAKWATA Council.

Community spirit was at the centre of his existence. For twenty (20) years he served as the President of Mwanza Jamaat as well as a Councillor – an achievement by any standard.  He was also on the board of Governors of Schools, Governing Board of the local prison where over and above his duty he visited prisoners on a regular basis. He was also a valued member of British Red Cross Society. The extent of his generosity was realised only after his death. Even his family did not know to what extent he helped people from different sections of Mwanza population, it did not matter to him what background, colour or creed people came from.

Mohammed Jaffer Bhai was very fortunate to have a life partner who supported him in his passion. Kubrabai served Mwanza Jamaat for 35 years by taking the responsibilities of the Tazia and Tabut. She was also a very good reciter of majlisis, nawhas and marshias and was often approached by other Jamaats to recite in Muharram but due to her commitments in Mwanza, she would decline.  Kubrabai also took part in cooking meals at Imambargha and was fond of inviting and welcoming guests from outside Mwanza.

In 1970 Mohammed Jaffer bhai was sent to Bujumbura on Council’s mission, there he developed cardiac problems. His health deteriorated over the years but he continued to give his service to the community.  Sadly, Alhaj MohamedJaffer bhai died minutes after making observations on the Chairman’s address, at the opening session of the 43rd Supreme Council Session held at Arusha Conference Centre on 5th April 1985.  He died while serving the community. He is one of the unsung Heroes of our community. 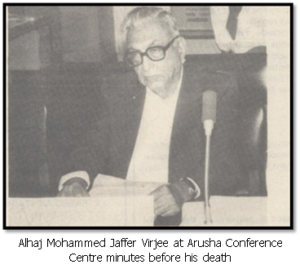 Let us all join hands together in prayers for the maghferat of Marhum Alhaj Mohammed Jaffer bhai and all Marhumeen with Sura-e-Fateha, may Allah (SWT) grant them all heavenly abode and place them in the proximity of Chaharda Masumeen (AS), Ameen.