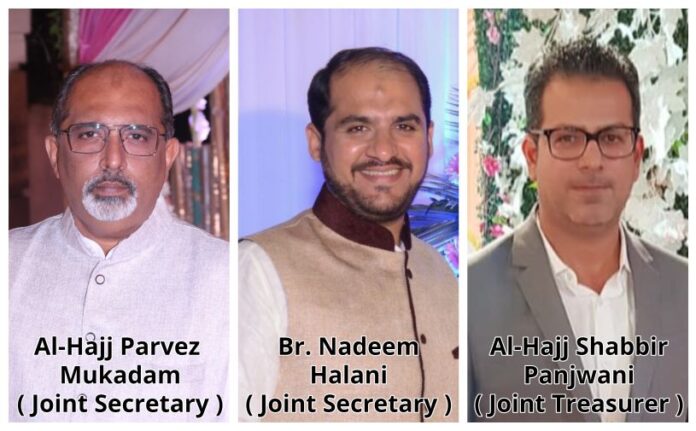 The Mumbai KSI Jamaat is all set to swing back into action with the newly appointed Office Bearers after the resignation of a few core members was accepted last week.

As per the Constitution of the Mumbai Jamaat, the President and the Vice President are elected by the Jamaat members through the voting system, and the other Office Bearers, i.e. the 2 Secretaries and 2 Treasurers are appointed by the President.

The Mumbai Jamaat elections were held in November 2019, wherein a new team was brought under the leadership of Al-Hajj Safdar Karmali and Al-Hajj Abbasali Virani, who were elected as the President and Vice President respectively. However, off late, a few members of the new team handed in their resignations, which resulted in the positions of 2 Joint Secretaries, 1 Joint Treasurer to be vacant.

The resignations were on account of the Covid-19 situation and the total lockdown in Mumbai, due to which the members felt that they could not perform their duties as expected. Hence, they decided to step down and allow others to take charge of the reigns of the Jamaat.

On 20th September 2020, the President, Al-Hajj Safdar Karmali and Vice President Al-Hajj Abbasali Virani called for an online meeting with the consulting committee members on Zoom app, wherein they appointed new members to fill in the positions of the team that were vacant.

As an outcome of the meeting, the following members were inducted into the vacant positions of Office Bearers in Mumbai Jamaat:

The Khojanews team wishes the new Office Bearers of the Mumbai Jamaat all the very best, and we pray to Allah (swt) to increase their taufeeq, Ameen.