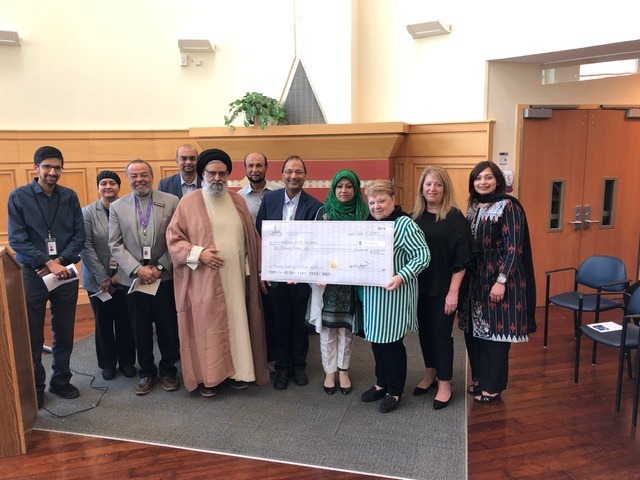 Khoja community members have donated another $50,000 to a campaign to build Canada’s first smart hospital as part of their community outreach.

The Islamic Shia Ithna-Asheri Jamaat (ISIJ) of Toronto presented a cheque to the Mackenzie Health Foundation at a ceremony to celebrate Eid.

ISIJ, also known as the Jaffari Community Centre, is one of the largest Khoja centres in the world and a member of NASIMCO.

It has been working in partnership with the Mackenzie Health Foundation since 2016 when it pledged to contribute $250,000 over the span of five years to help equip and build the Mackenzie Vaughan Hospital – Canada’s first smart hospital.

The Foundation is spearheading a $250-million Exceptional Care Belongs Here campaign to construct the new hospital – the largest fundraising drive led by a community hospital in the country.

The Jaffari Community Centre has been raising awareness of the campaign and making annual donations as part of its broader community outreach.

Mr Meghjee said: “The new hospital will be used by many of our members and participants. As we were celebrating Eid at Mackenzie Richmond Hill Hospital organized by the hospital and our own Chaplain Br Ashiq Kermali, we thought it would be the best time to give the gift of $50,000.”

In a speech at the event he explained: “In the month of Ramadhan, we learnt to introspect and observe our surroundings to see how we could better ourselves and continue to help the society that we live in.

“As we celebrated Eid, it seemed befitting that at such a joyous time of the year, we recognize and appreciate the relationships we have established, especially like the one we have with Mackenzie Richmond Hill and The Foundation.

Mr Meghjee went on: “We, at the Jaffari Community Centre, have dedicated time and effort to educate and inspire the community to support the hospital and the Foundation so that they may flourish, for their success is the success of our broader community, and their accomplishments make the fabric of the society we reside in, a strong one.”

He echoed the words of Shabbir Jeraj, a past President of the ISIJ of Toronto, who said: “Today we give back to the community that has nurtured us, nourished us and allowed us to flourish together”.

These words resonate strongly today as ISIJ’s donations help to transform healthcare needs, create jobs and give the expanding community around it a place to grow.

Mr Meghjee told the Foundation campaign team and medical staff gathered at the ceremony: “We not only stand by you, but we stand with you, and know that we value the relationship we have worked hard to establish. Together, we can overcome challenges, build new bridges, and pave a bright future for the generations of tomorrow.

“On behalf of the Jaffari Community, a big Thank You to all of you for whatever you do. We use the services of the hospital day in and day out. We are truly blessed to have this hospital close by us.”

“Heart of gold” Jamaat supporter passes away in New York