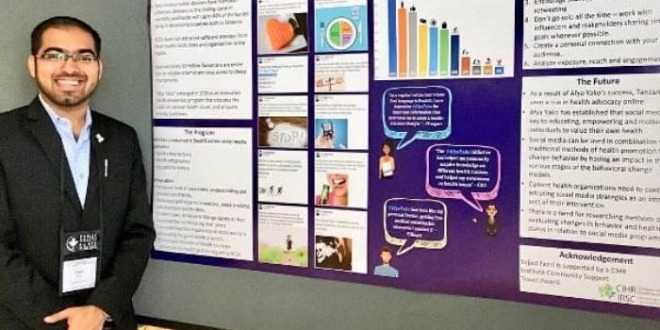 The Swahili-language health awareness programme began with a weekly Twitter post and has now expanded to Facebook and Instagram. In a country with poor health infrastructure, particularly in rural areas, it leverages the spread of smartphones and cheap 3G internet to promote the healthy lifestyles that play an important role in preventing disease.

“I founded Afya Yako – which means Your Health – to educate the public on various health issues and also answer pressing health questions that they may have,” Dr Fazel said. “A lot of NGOs and health institutions focus on treatment rather than health education.”

The impact has been huge, he says. People have given up smoking, adopted a healthy diet, started exercise groups and persuaded friends and family to join them. Afya Yako has promoted blood donation campaigns, advocated contraception and interviewed health professionals on its TV offshoot.

Tanzanians have realised that social media has a social value, and is not just a vehicle for celebrity stories. Doctors and medical students have jumped on the bandwagon with their own online programmes on topics ranging from infectious diseases to nutrition.

Dr Fazel is currently a Research Associate at Alberta Health Services in Canada working on cancer prevention, and he has experience working in public health and health management across three continents. His overarching mission is social justice.

He spoke about the success of Afya Yako at the Canadian Public Health Association Forum in 2018 and has joined the Non-Communicable Diseases Working Group at the Tanzanian Ministry of Health at the personal invitation of the Health Minister. Taking a lead from Dr Fazel, the government has created a department of public health education.

Dr Fazel is now working on a book so that East Africans who do not use the internet can benefit from his health education information. He is also planning a smartphone app that would be a quick guide for patients about illnesses endemic to East Africa.