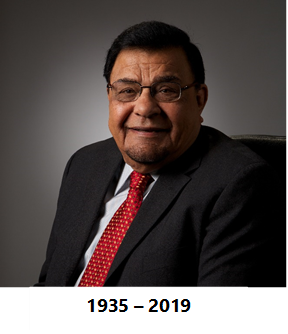 The Africa Federation Secretariat received with deep sadness the news of the passing away of Alhaj Murrabbi Asgarali Nazarali Bharwani in Dar-es-Salaam on Monday 11th November 2019 and was buried the same day.

Marhum Asgar bhai was born in Hoima Uganda on 11th January 1935; he leaves behind his wife Gulbanu bai and three sons Mehboob, Munir and Riyaz.

Following the Asian Exodus in Uganda, Asgar bhai migrated to the UK and later Canada. He was actively involved with the activities of Kampala Jamaat and he was among several members who helped set up the KSI Jamaat in Toronto.

He moved to Tanzania in 1972 and established his Company Tanzania Printing Services Ltd in 1976. It started as a printing press with three small machines employing 20 people which grew to a large group of Companies that include Red Dot and Berger Paints to mention a few.

The Community has lost a passionate leader who had a vision towards its upliftment. The landmark achievement by Marhum was the purchase of various properties which today houses our Community Schools in Dar-es-Salaam. He was the Chairman of the Dar-es-Salaam Jamaat Construction Committee which oversaw the construction of the Juma Haji Residency, Amersi Mawji Residency, and the KSMIC Sabodo car park. He built and donated the Mosque at Udowe to Africa Federation for Bilal Muslim Mission on behalf of his family for utilization by the Community.

Marhum Asgar bhai was bestowed the prestigious Husseini Medal by Africa Federation at the 23rd Triennial Conference held in Arusha in April 2007 by the then Chairman Alhaj Ramzan bhai Nanji for his numerous philanthropic activities and for his leadership which saw momentous growth in the community. 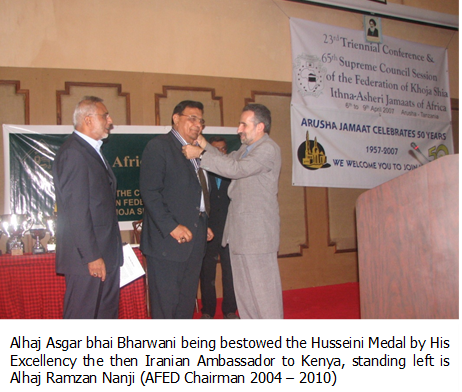 The World Federation presented a lifetime achievement award to Marhum Asgarbhai during the 14th Ordinary Conference on Saturday 17th May 2014. 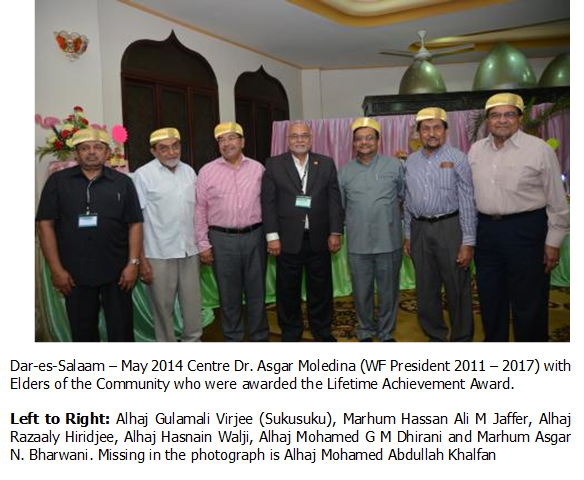 “Marhum Asgar bhai had a vision towards the upliftment of our Community with various projects undertaken by him during his tenure as the President of Dar-es-Salaam Jamaat and later are testimony of his foresight for the Community. He was always in the forefront in contribution towards the KSI Community in Africa and outside Africa; he was a very good supporter of Africa Federation, a mentor and a brave personality who always stood firm on matters of principles and Shariah. Alas; today we bid farewell to our Legendary Leader, Mentor and a dedicated servant of Allah (SWT). His Wisdom and contributions shall be missed by us all.”

The Secretariat conveys its heartfelt condolences to his wife, sons and all family members.

We request for Sura-e-Fateha for him and all other Marhumeen.

Read the other article here