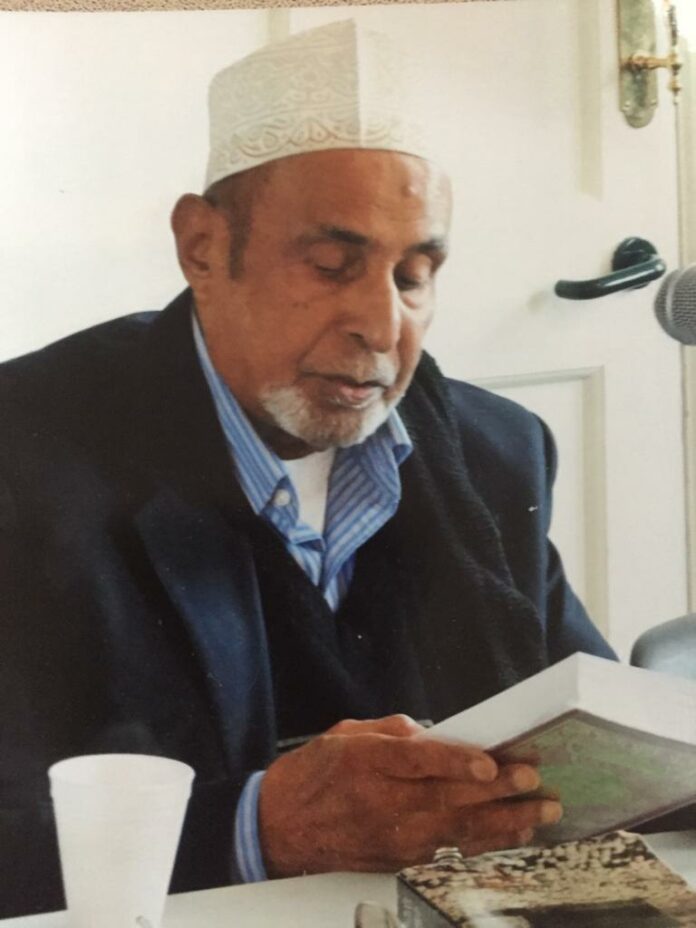 If there was one phrase that would aptly describe Mulla Anu, it would be: he was a quintessential Khoja Shia IthnaAsheri. Born on 9 September 1934, in an equally quintessential, early Khoja settlement city of Mombasa, Mulla Anverali Walimohamed Haji Walji truly represented many qualities we all aspire to in our Community.

A businessman by day, and a muballigh by night, his was a life in perfect balance of deen and dunya. Metaphorically his was a voice that reverberated the goodness of our Community and literally his voice was heard over everyone else’s; be it a salawat upon the names of the masumeeen, appreciation of an Urdu sher, a loud SubhanAllah at a poignant point in a majlis, not to mention his emotional recitation of the many Ziarahas or his signature recitation of the kalema as he led many a funeral on the way to the kabrastan. Wherever Mulla Anu was found in a gathering, you simply could not miss his presence.

Having lost his father at the age of three, he fondly talked of how his mother of just 19 years raised him and his sibling and how that inspired him to serve the Community. The genuineness of his care and concern for the Community was so very evident, as vouched by his elders, as they saw young Mulla Anu at the forefront of Jamaat activities. He continuously served the Mombasa Jamaat in many committees, including being the Honorary Secretary or Mukhi for over four decades.

Mulla Anu would hardly ever miss a Community event, be it a majlis or a conference of the Africa Federation or the World Federation. His was a familiar voice of pragmatism and unity. Remarkable was his brilliant sense of timing, with a conciliatory interjection when deliberations got a little heated in our Conferences. But it was after these meetings that Mulla Anu was really in his element, offering his humorous anecdotes on the state of the Community with a telling ring of truth. His sense of humour and the ability to laugh at himself endeared him to young and old. Many a time I had the good fortune to see, at close quarters, the anecdotal interactions between two friends – Mulla Asghar and Mulla Anu. There were moments when one almost felt transported back to the era when both these bosom friends were rather naughty schoolboys or young men growing up in Mombasa.

I last saw him at the COEJ Khoja Heritage Festival, at the Watford Imambargh in April 2019, beaming with pride as he meticulously pored through the exhibits and animatedly recounting his recollections of our history. His memory was truly legendary and would so easily recall many a milestone moment of the Community, especially about the evolution of Mombasa Jamaat, with precise dates and naming personalities like Marhum Mohamedali Meghji or Marhum Mulla Asghar amongst many. In the documentary, The Khojas a Journey of Faith, when I wanted to chronicle the names of the many Khoja Mullas who had served the Community over the past century, I could not find a ready-recorded reference. It was Mulla Anu who came to the rescue and readily recounted, from memory, the names of our venerable Mullas who have made us who we are as a Khoja Community. The only name I needed to add was Mulla Anu, as he did not include himself in the list! That was a mark of his humility.

A legend and a fine example of a caring and a passionate personality, his name will remain forever etched in the institutional history of the Khoja Community, as an exemplary figure for us all to emulate. May Allah Bless Him with a place in the closest proximity of the Masumeen (AS) who he loved and served all his life.