Home Community The Imam with Impact 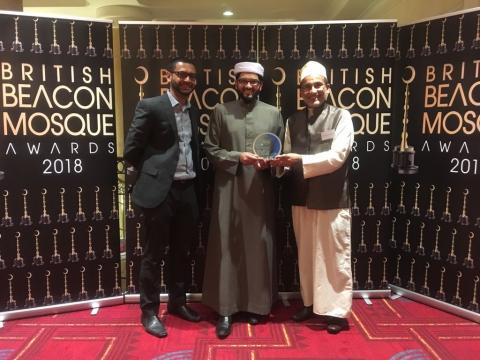 Britain’s ‘Most Impactful’ Imam has been named as Sheikh Fazle Abbas Datoo of Wessex Jamaat in Fareham. He was awarded the title at the inaugural Beacon Mosques Awards in September.

More than 200 mosque representatives attended the ceremony, with awards presented in ten different categories, from Best Youth Service to Best Innovation. The Awards are a celebration of the incredibly positive contribution and remarkable achievements of many mosques across Britain.

Wessex Jamaat said: “We are incredibly excited at this news, and we were also shortlisted for Best Green Initiative.”

Focal point for the entire community

Beacon Mosque was developed to recognise that the role mosques and Islamic centres play in the infrastructure of towns and cities is being felt, and their impact on the social and cultural fabric of society is being measured.

The Beacon Mosque initiative allows mosque leadership to rate their mosque against set criteria to achieve 3*, 4* or 5* rating.  A 5*rated Beacon Mosque serves both its congregation and the wider community, through an efficient, inclusive and sustainable provision of services.

BeaconMosque.com believes that optimal use of a mosque is only achieved when leadership, management and members understand the scope and purpose of the mosque; how it is not just simply a place for prayer, but a focal point for the entire community to serve, safeguard and support.