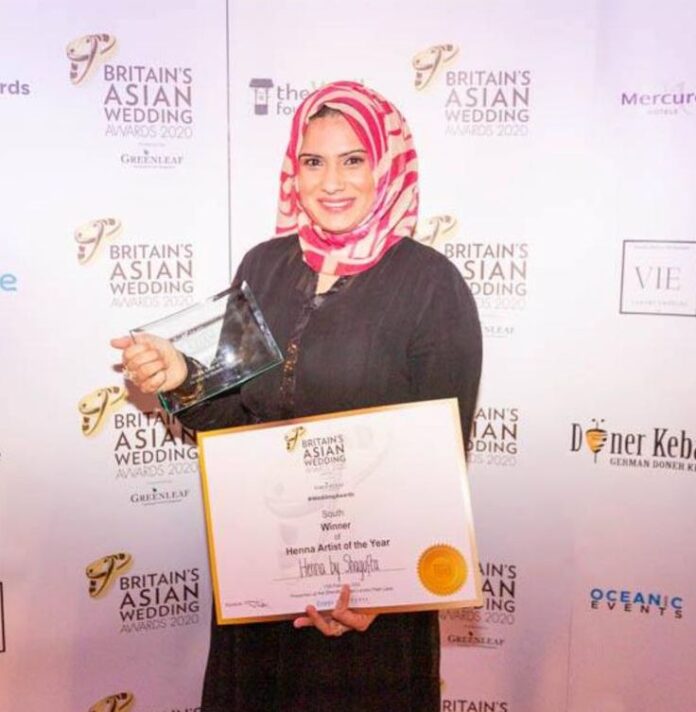 Khoja henna artist Shagufta Walji has been named the best in Britain at the Britain’s Asian Wedding Awards – and dedicated her win to all women juggling family and career.

Her incredible designs have been featured in leading magazines and she is in high demand throughout the wedding season, as her passion and flamboyant personality shine through her work.

But henna is also the way Shagufta has found new confidence and belief in herself after a very difficult period in her life.

“The last few years have been a rollercoaster ride which didn’t seem to end! I went through a messy divorce and was left responsible for my three children,” she explains.

“I felt like I was in a dark tunnel and no light was anywhere in sight. For my children I kept smiling, started rebuilding my optical career again and turned my new-found hobby as a henna artist into something which defined me as a person!

“Applying henna puts me into a transit zone where the designs help you focus on the intricacies of the good things at home. I also concentrate on how to bring smiles to my brides’ faces.” 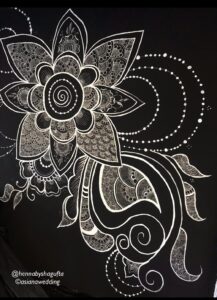 “My art is my passion”

Shagufta, 39, lives in Northwood, north London, and is a member of Stanmore Jamaat. She works one day a week as a dispensing optician, but says: “It is my art that is my passion.”

At the Britain’s Asian Wedding Awards she was named overall Henna Artist of the Year after first picking up the award for best in the southern region.

But her first thought on winning was for others, not herself. She says: “The award I won is solely dedicated to all those women who try and juggle being a mum, being a partner, being a career woman too and stay strong for those that they love! For single mums who feel they’re in a hole, never ever give up! Keep going and pushing past the toxicity which surrounds you because we can do it! We don’t need a man to applaud and recognise our work we need to believe in ourselves.”

She adds: “My faith is very strong and God really helped me. God has blessed us with so many talents and jobs we can embrace and single-handedly cope with. As Oprah says: ‘Anything you can imagine you can create.’ None of this would have been possible if it hadn’t been for the support of my friends – it’s so important to support each other, especially the ‘she pac’.”

Shagufta has built her brand Henna by Shagufta so that she now has 23,000 followers on Instagram and has appeared in Asiana and Khush magazines, showcasing her work with different seasonal designs. As well as Asian weddings, she is also in demand providing henna art as part of the entertainment at white weddings.

Her work boosts her own self-esteem and is equally therapeutic for the brides she paints: “I am with them for three or four hours and am able to calm them at stressful time for them.”

What’s more, her children, aged 13, 11 and eight, are also thriving at school. They are Shagufta’s top priority but she is delighted that henna has also become an important part of her life.