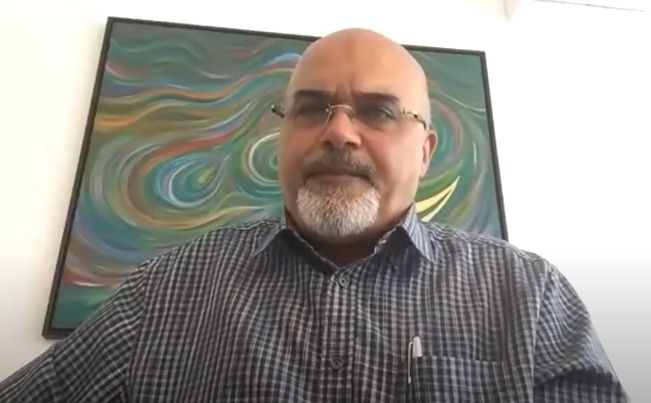 Covid-19 survivor Gulammehdi Sumar has given a passionate account of his journey from the brink of death in a speech to an online meeting of Stanmore Seniors.

And he urged members of the London group to act quickly if they feel unwell rather than leave the virus to escalate with the risk of them needing invasive hospital treatment later: “Sometimes elderly community members are shy, or think it’s taboo, but get yourself tested.”

He thanked the community, his family and friends for all their support during his “challenging and difficult times”, including a horrendous spell in ICU and slow recovery.

He added: “I salute the staff at the NHS, they’re heroes.”

“This has not been an experience but a journey for me, my family, our community members and others in a similar situation,” he said. “I am so grateful to one and all for remembering me. The physical, emotional and mental suffering I went through, and the people around you who are suffering equally or more.

“I would not have survived if I did not have my family, brothers and sisters, my wife, my children, my community. All your calls. I am proud to belong to this community. The amount of well-wishing and messages from all over world has helped me enormously and Allah is my witness I can never thank you enough.”

We are more susceptible

Mr Sumar stressed: “I am very lucky to be alive and with all my heart I don’t want any of you to have to go through this. As Asians and because of our age group we are more susceptible.”

Three months after leaving hospital, he urged: “It is very important to continue social distancing. Wear a mask whenever you go out. Don’t risk somebody’s life.

“This pandemic is not over and believe me it will be with us for a long time yet. Hopefully what I can share with you can be used to help our brethren and the wider community.”

The Khoja community has lost around 100 of its 140,000 members worldwide to Covid, every death a family heartbreak.

Mr Sumar, a dental practitioner, explained that he had travelled extensively to Iraq, Dubai, Bangladesh and the Philippines from December to February, but did not know where he had become infected. His illness began with small coughs, fatigue and fever in early March and he self-isolated for two weeks after calling the NHS.

By 20 March he was wheezing in the lungs and so breathless he needed to call an ambulance. He was completely unprepared for what was to follow.

“Hospitalisation was so scary, so dramatic,” he said. “It is not surprising that Covid survivors are going through Post-Traumatic Stress Disorder.”

When he was admitted to Northwick Park Hospital in London there were already 100 active cases and staff struggled to find him a bed. He recalled: “The frenzy, my fear, I was cursing: human nature in only thinking about yourself.”

His condition had deteriorated so rapidly that medics were afraid they would lose him, so said they would have to intubate him. He agreed without realising what this meant or that it was to save his life.

Six hours earlier he had waved goodbye to his wife at home, feeling like a reasonably healthy person. Now he was in ICU.

“This virus is not a killer, it is a superkiller,” he said. “It is not only your lungs. It’s like a tornado. A tornado takes the roof, the houses, the rivers, the schools, the cars. This virus attacks the whole body. I was a helpless weakling. I am violated, raped, assaulted. All the organs in my body have been affected.”

Mr Sumar went on: “I was sedated, and the deeper they sedate you the harder it is to bring you back to life. I was there for ten days, that’s 240 hours of deep sleep.

“They say people go through delirium. I remember being in a high tower with cars flying, and a brother from Stanmore crashing so when I recovered I had to check he was still alive; I saw people fleeing from Iran going to India. I also have a good memory of a wedding.

“Six days into my journey my lungs started to fail. I was between becoming a number – one of the 45,000 who have died in UK – or survival. I had a near-death experience. I could feel my route away, like I was being drawn far away. I felt my body and soul had detached. I was hovering near the graves of my parents.

“My escape from death was not bravery, it was Allah’s will. With Allah’s grace I got a second chance.”

His torment was not over, however. When he was brought out of sedation, the tubes keeping him alive felt unbearable.

“On tenth day I was crying, pleading, holding the doctor. She said I could have a breathing mask instead. It was like going from a boiling pot to fire. The mask was so difficult, making a noise like a Rolls Royce engine, you can’t sleep. For two days it was like a muzzle on a dog. You’re helpless.”

When he was moved from ICU to a high-dependency unit he was aware that some of the patients around him were dying. He was not allowed to eat or drink. Everything was through drips: “My lips were parched. I was crying, I was thirsty.”

He was confused by the medication and when doctors asked, “Who is the Prime Minister?” he replied: “Gordon Brown!”

He added: “The most embarrassing was when two lady nurses came to give me a bed bath. I felt worthless and I was cringing although they were looking after me. I had been full of tubes and not had a shower for 12 or 13 days.

“After two days I was taken to a normal ward, and I was so happy knowing the worst was nearly over. But I was stupid because I asked the nurse to get me a taxi to go home, when in fact I was so weak, trying to pull out catheters, unable to function to go to the loo.

“It was so dehumanising. I needed a Zimmer frame to go to the toilet then I couldn’t get up from the seat because my muscles were wasted. The longer you are in hospital the longer it takes to heal.”

As he slowly recovered on the ward he felt so alone, cut off without a phone and with no money to buy a newspaper. His family couldn’t visit him and they had just one update call a day from the hospital to say he was still alive.

“Inshallah when I’m more able I want to make it part of my duty to mankind to go and visit people who are lonely and I hope that will help others,” he said.

And there was one moment of great satisfaction: “I had a long talk with an Afghan patient who was reluctant to be intubated, I gave him confidence and he agreed. That was my purpose in that bed, to save one life.”

It is three months since Mr Sumar left hospital but recovery has been tough.

His right knee is paralysed, painful 24 hours a day with no treatment to help, and he has severe bone pains. When he came home, sitting on the sofa was sore because he had lost the padding on his backside.

He will need counselling because he has unpleasant flashbacks, and he urged Khoja seniors to remember: “Mental wellbeing is not a taboo, it is part of the mainstream like food and spirituality. Talking about mental wellbeing is very important.”

He warned that there are 20,000 or 30,000 survivors going through psychological, emotional, mental and physical after effects of coronavirus, putting a heavy load on the NHS.

However, he has turned the corner. He was overweight before Covid and lost 11 kilos. He now walks 9km a day to build his strength.

Coronavirus has given him a “pivotal chance” to re-evaluate his priorities. “We are always running after the world, not looking after ourselves,” he said.

Advice to the community

His advice to the Khoja community is:

And finally: “If there are things you want to do in your life but have been prevaricating, do them now.”

Youth and women at the forefront