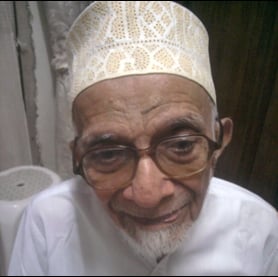 The Khoja Shia Ithna Asheri  community in East Africa has lost countless gems in recent months, and the community is mourning yet again. With immense sadness, we have received the news of the demise of Mulla Abdualrasul Hassanali Khaki on 28th July 2021 in Mombasa, Kenya.

Marhum Mulla Abdulrasul was born on 15th March 1926 in Mombasa, Kenya. A self-taught individual, a mentor, a teacher, a fatherly figure to manifold, a social workerand and a businessman by profession. Marhum was an avid reader with a particular interest in Islamic History and Fiqh and sought the company of Ulama to further acquisition f knowledge from a very young age.

Marhum Mulla Abdulrasul started his Tablighi activities at a very early stage in his life under the guidance of his mentor, Marhum Al-Hajj Mulla Mohamed Jaffer – the father of Alhaj Mulla Asghar. He joined Huseini Night School as a teacher at the tender age of 18 years, when it was established at Mombasa in 1944 by Alhaj Mohamedjaffer Sheriff Dewji with the appointment of Mulla Mohamed Jaffer as its Principal.  In 1956, when Mulla Mohamed Jaffer passed away, Marhum H. M. Nasser was appointed as the Headmaster of the school with Mulla Abdulrasul as his deputy. A few years thereafter, Mulla Abdulrasul succeeded him as Headmaster of the Huseini Night School. He decided to hand over the reins to Alhaj Mulla Asghar in recognition of his knowledge, acumen and dedication also taking into consideration his young age.

Imparting religious education and conducting classes in Fiqh and Islamic history had been the lifelong mission of Mulla Abdulrasul, and he lived by it. He also taught Urdu language and prompted the children to learn the language. Even when engaged in business activities, his doors were always open for individuals to walk in without an appointment to seek clarifications on masael of Fiqh, matters related to matrimonial disputes and interpretations associated with the Islamic laws of inheritance. Women also often went in person to his shop and spoke to him on the phone to seek clarifications and guidance on various religious questions.

His Special Interest in Conducting Classes

He continued to serve at the Huseini Night School, which later on flourished as the Huseini Madrasah, until recent years in 2000. Mulla Abdulrasul also took a particular interest in conducting special classes for adults on Islamic history. For many years he held wokshops for prospective Hujjaj to acquaint them with the masael for Hajj. In the early ‘70s, Marhum Dr Jafferali Asaria, who was the then Hon. Secretary of the Federation of K.S.I. Jamaats of Africa, initiated the idea of adult classes for ladies. Mulla Abdulrasul conducted these classes on Fiqh, History and Muaamelaat (dealings) and would indulge in interactive discussions with the participants.

While on a visit to London for medical treatment, at the request of Marhum Mulla Asghar, the founder of The World Federation of KSIMC, Mulla Abdulrasul conducted special classes on Fiqh for new converts to Islam.

In addition to his role as a Madrasah teacher, since 1956, Mulla Abdulrasul was an active member of the Ghusl, Kafan, Dafan Committee, and, over the years, taught scores of individuals on related practices and masael. To his credit, he trained three generations of pupils (male and female) and prompted them to be active in this field. He was a name that every household in Mombasa would know and testify that Mulla Saheb taught them at one stage or another.

He also cooperated with Bilal Muslim Mission of Kenya in running special classes on Ghusl, Kafan, Dafan for Mu’allims from rural areas. Mulla Abdulrasul believed that for a religious leader (whether male or female) to be effective, one must engage in social activities and be seen to be a part and parcel of society. All throughot his life, he practiced this outlook.

Mulla Saheb was consulted by Muslims of all denominations about the sighting of moon for commencement and end of fasting.  He was also consulted by very many about fixing the dates for weddings.  It is reckoned that together with Marhoom H. M. Nasser, the days of auspicious dates of wafat, khushali and other important events in Islamic calendar (based on recommendations of Ayatullah Husein Burujerdi) were set for Africa Federation which to date are being followed by the Khoja Shia Ithna Asheri fraternity not only in Africa but throughout the world.

Despite his advanced age, a heart bypass surgery, eye problems related to glaucoma and retina resulting impairment of  his vision, he was ever ready to conduct classes, even if it were to be for just one student.

Mulla Saheb had a sharp memory and kept in constant touch with the current community and international affairs. He was proactive and looked forward to welcome visitors at his home. Receiving leaders of the Africa Federation and World Federation, he would not hesitate in pulling their ears for their shortcomings and would emphasize upon Taqwa as the criteria for leadership.  He passed away peacefully on the eve of Idd-e-Ghadeer 1442 Hijri. During 96 years of his life, Mulla Saheb demonstrated how can a person be a useful member of the society and thus become an icon for service to the community for others to emulate.

Statement by Alhaj Safder Jaffer, President of The World Federation:

Upon receiving the news of Mulla Abdulrasul’s demise, the President of The World Federation took to Facebook to express his grief, “I am deeply shocked and very saddened to learn of the demise of Mulla Abdul Rasul Hassanali Khaki in Mombasa. He was my teacher, mentor, a fatherly figure and most importantly, the standard-bearer of religious activities in Mombasa. An amazing personality who taught our fathers, us and even our children. A towering personality that will surely be missed and we will be forever indebted to. Please remember the Marhum in your duas on this auspicious eve of Ghadeer.  Our hearties artfelt condolences to his family and the entire community at this huge loss to the worldwide KSIMC global family. May the Almighty elevate his status and grant him a lofty station in Jannah in the proximity of the 14 Ma’sumeen (AS). Al Fateha” 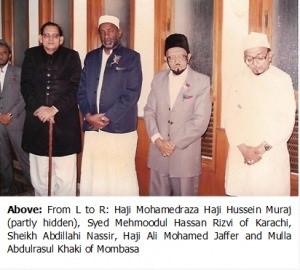 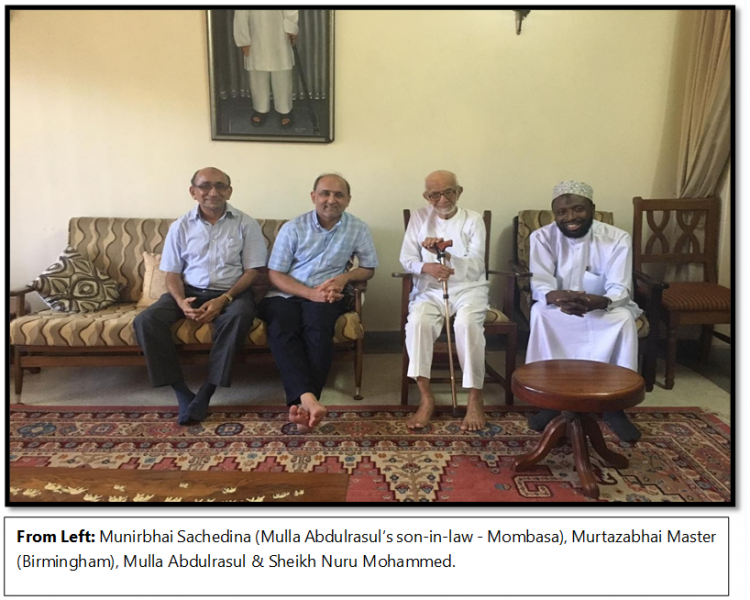 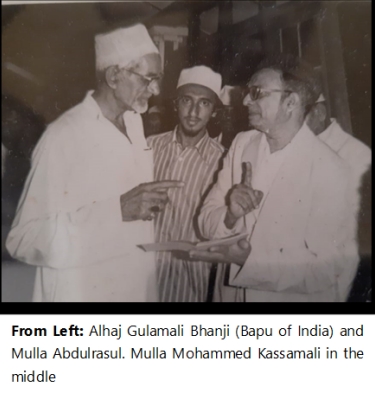 Mulla Abdulrasul was a silent worker who never sought recognition or publicity. He dedicated his life to the service of the community for which we will always remain indebted. He leaves behind his two sons, Ahmed and Mohsin and six daughters.

The World Federation offers its deepest condolences to the Family of Marhum Mulla Abdulrasul Khaki, Africa Federation, and our community members, especially in Mombasa. We pray to Allah (swt) to grant the Marhum magferat and elevate his position in Jannah, Ameen.

We request our readers to remember the Marhum with a Surah Al Fatiha. 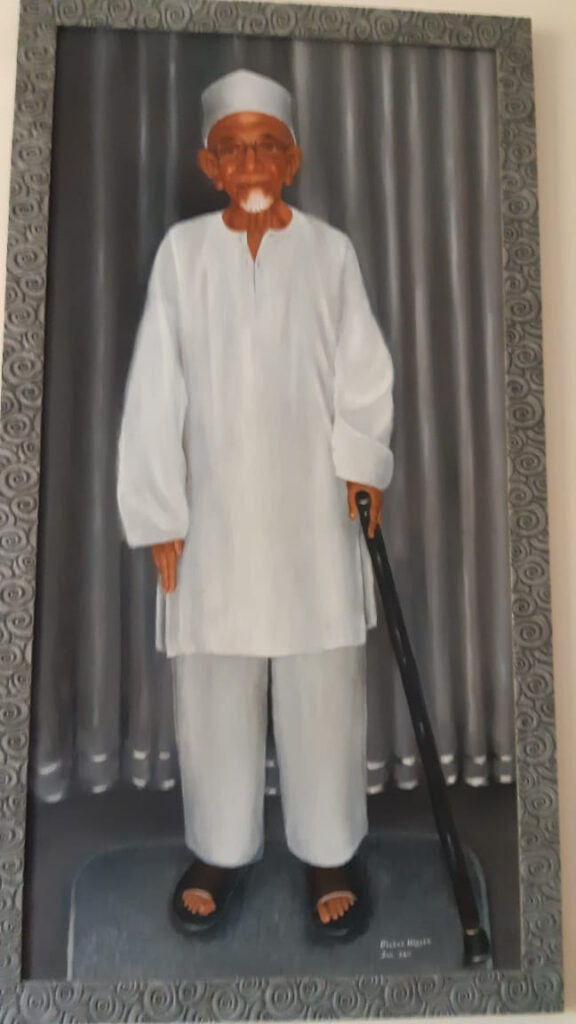 Ten ways to Prepare for the holy month of Ramadhan