Home Heritage Service from the age of 8 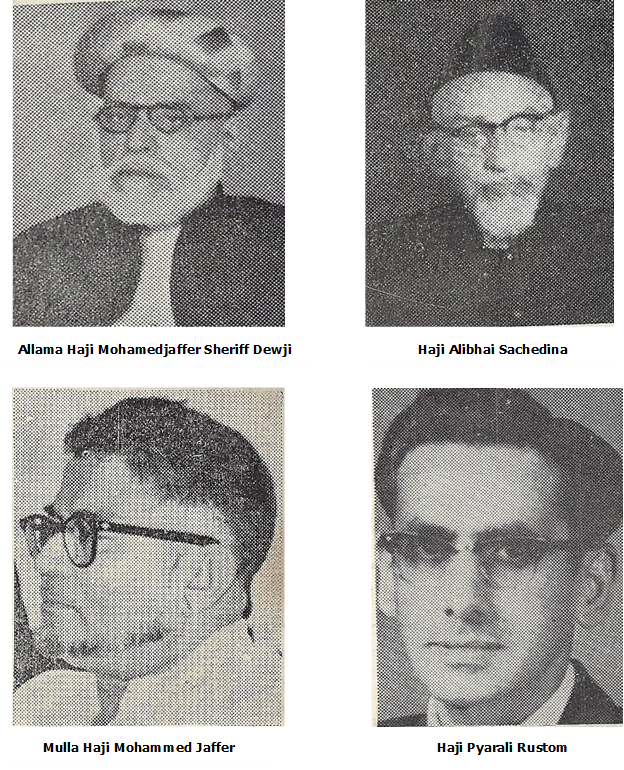 Interviewed in 1960, Marhum Pyarali Rustam remembers his childhood in Mombasa in the 1920s and 1930s:

“In 1927, at the age of 8, there arose in me an interest and desire to volunteer for services to the community. I was joined in this by my friend Gulamraza Rashid and Br Gulamali Kaka who was an older, intelligent person with a deep religious interest; through his encouragement, the three of us established the “Husseini Foj” (The Army of Hussein) – an organization of volunteers to serve the community. More youths joined and this resulted in increased enthusiasm for Majlis and volunteerism.

“The activities of the Foj resulted in a deep interest for religious programmes. The elders of the community expressed their appreciation by attending the events regularly and financially helping the Foj. After Gulamali Kaka fell ill and retired, the responsibility of the leadership of the Foj fell upon the two of us, along with many brothers who offered their support. The enthusiasm and the services of Br Gulam Kassamali during the latter years were enormous and will be deeply remembered.

“Our membership kept on changing like a tide, sometimes going up to 50 and sometimes going down to five, but our resolve brought us success. In 1932 we acquired a meeting place when prominent philanthropist Marhum Bahadurali Mawji offered us a spacious room at his property near the Old Customs. We also started “Mehfile Husseini” at this location, holding Majlis every Friday night and during Muharram and wafat/khushalis.

Success due to Night School

“In 1935, due to increase in attendance at Majalis, Haji Mohamedjaffer Sheriff Dewji offered us the ground floor of his residence near the seashore at a token rent of K.Shs. 10 per month and this continues today. In keeping with the name of the Mehfil, the birthday of Imam Hussein (AS) was elaborately celebrated on the 3rd of Sha’ban every year, creating vivid memories among the residents of Mombasa.

“The attention of the organization was drawn to two distinct facets of tabligh. One was the formation of Night School where religious education and masaels would be imparted to the youths. The other was the introduction of Ashura Procession (Juloos) in remembrance of the martyrdom of Imam Hussein (AS). The Night School was established in 1934 and continues to date, as does Juloos. The boundless efforts and appealing teaching of Mulla Mohammed Jaffer led to the rapid growth of Night School. It stood out as one of the most successful institutions of the community, with the religious knowledge it imparted helping people in both their secular and religious life.

“In order to encourage the offering of prayers and the quest for religious education, one of the elders, Marhum Jaffer Dewji, nicknamed “Baba”, gave gifts to children who regularly offered prayers. Baba also used to visit the students regularly and show deep interest in their studies. Another memorable character was Allama Mohamedjaffer Sheriff Dewji, author of wisdom-laden Gujarati Majalis.

“This enthusiasm for religious knowledge, the upholding of prayers, the love of Majalis, respect towards elders, in short, the religious awakening evident today – all of this can be attributed to the contribution of these great personalities.”

The passing of a Khoja “Global Muballigh”