Home Community Khoja couple awarded by the Government of Tanzania for their selfless service... 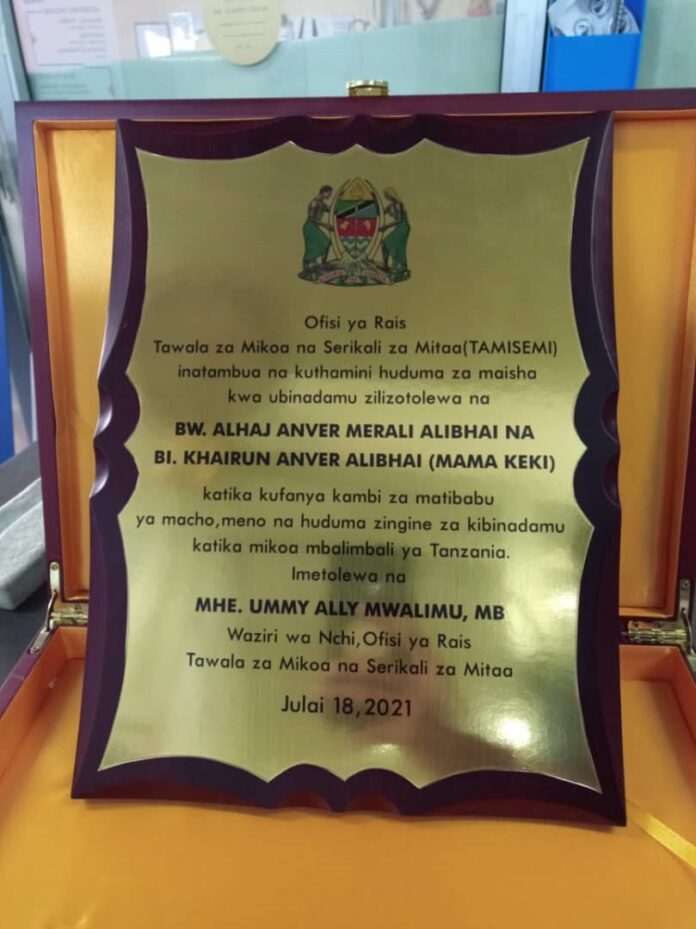 A Tanzanian based Khoja couple has been recognised and awarded by the Government of Tanzania for their tireless efforts towards humanitarian causes.

The Government of Tanzania has awarded Al-Hajj Anverbhai Merali Alibhai and his wife Bibi Khairun, for their zealous efforts in serving humanity in medical fields, especially eye care and dental, among other various services throughout Tanzania.

Anverbhai and Bibi Khairun, fondly known as ‘Mama Keki’, have been running the Bilal Eye camps for nearly 35 years and have attended and treated tens of thousands of patients while also restoring vision for numerous cataract patients.

Awarded by the Government of Tanzania

On 18th July 2021, Anverbhai and Bibi Khairun were awarded by the Minister of Internal Affairs, Her Highness Ummy Ally Mwalimu, on behalf of the Government of Tanzania.

(Translation of the plaque: TAMISEMI acknowledges and values the services of life to human beings that have been given by Br. Al Hajj Anver Merali Alibhai and Bibi. Khairun Anver Alibhai (Mama Keki). Amongst the works, they have been doing camps of treatment of eyes, teeth and other various medical support in various regions in Tanzania. This award is presented by Her Highness Ummy Ally Mwalimu, the Minister of the Internal Affairs, Office of the President)
Please note: Translation may vary.

Apart from the medical support and services, the couple also assists in various community issues like match-making, reconciliation, helping the poor, students scholarships etc. The Africa Federation has also recognised and awarded them for their various services.

The Khoja News team extends our congratulations to Murabbi Al-Hajj Anverbhai Merali Alibhai and Bibi Khairun for their achievement and pray to Allah (swt) to reward them generously for their tireless efforts, Ameen.