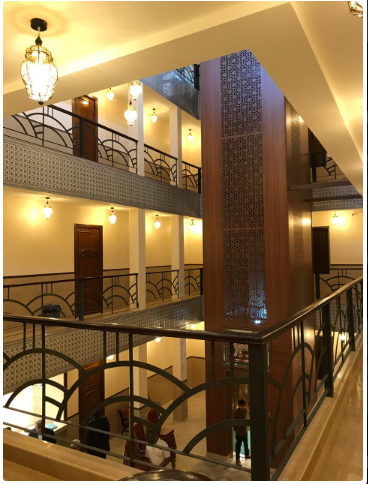 A newly opened residence near the Holy Shrine in Kadhmiya is offering pilgrims a comfortable, clean and welcoming place to call home for the first time in decades.

Many dignitaries attended the inauguration of Al Kadhmiya Residence, which is only 100m from the Kadhamain Holy Shrine north of Baghdad. With 26 rooms it can host 76 zawwars.

For decades, most pilgrims have only been able to stop for a few hours at the Holy Shrine despite yearning to spend more time at the sanctified ground where two of their Imams (as) rest. With the Al Kadhmiya Residence open, at long last they can stay for a few nights as they perform their ziarat in peace.

Its importance is highlighted by the dignitaries present:

The story of this project began 106 years ago with the establishment of the AFP in Bombay, India, to provide accommodation for pilgrims to the holy cities in Iraq, Iran, Syria etc.

From 1970 Marhoom Sultan Moloobhoy and after him from 1981 Marhoom Roshanali Dawood Nasser worked relentlessly to claim the properties back from Saddam’s regime.

From the passing of Marhoom Roshanali Nasser in 2008, his son Al Hajj Mohibali Nasser together with Al Hajj Gulambhai Virji and Marhoom Gulambhai Meghani worked with Al Hajj Salmaan Moloobhoy tirelessly to continue the efforts of our Khoja forefathers.

Alhamdolillah AFP were successful and have recovered all the properties in Najaf, Karbala and Kadhamain. The Faiz were registered once again as an NGO in Iraq from December 2013.

The Al Najaf Residence was inaugurated in June 2016 and already some 4,500 pilgrims have stayed there. It is so close to the Haram of Imam Ali (as) that it shares a wall with the Haram precinct. Its en-suite toilets, air-conditioned rooms and three sub-continental meals a day – all at very reasonable rates – have made it a home away from home for grateful zawwars.

A new residence in Karbala

Equally exciting is the new 12-storey pilgrims’ residence in Karbala that is in the final stages of construction. The Al-Qasr Residence has 156 rooms to host 500 pilgrims. It is only 400m from the Holy Shrine of Imam Hussain (as) on Bab al-Qibla Street and a few steps away from the entrance to the sehen and the expanded haram precinct when the Ataba completes its work.

The cost for these projects totals US$17.5 million, of which the AFP have received a substantial portion from donors. With US$2 million still needed to complete the Al-Qasr Residence project, Insha’Allah with the generosity of the community it will open this year.

Insha’Allah once the Karbala project is open, the AFP plan on sponsoring poor zawwar to enable them to visit the Holy cities in Iraq with airfares and accommodation fully paid for. Further details of AFP and its projects (as well as information on how to donate) is available from: http://faizepanjetani.com