The Khoja community in Toronto has been honored by the York Regional Police Force, with ‘Alim Maulana Sayyid Muhammad Rivzi being given an award on behalf the Jaffari Community Center. The center hosts more than 200 events each year, to promote charities, hold tours and talks, and to promote our faith.

Over the years, the Islamic Shia Ithna’Asheri Jamaat of Toronto (ISIJ of Toronto) has accommodated numerous group and school visits. Each year, members of the York Regional Police Force (YRPF) visit the Jaffari Community Center to gain a better understanding of our faith. This is part of YRPF’s diversity program in which they take the new officers for a visit to various places of worship to make them familiar with the faith, values, practices and sensibilities of the minorities in the York Region (a northern suburb of Toronto).
In such visits, our Resident ‘Alim, Maulana Sayyid Muhammad Rizvi, usually gives a short talk about Islam and Muslim practices, with emphasis on the issues that the officers should be aware of when interacting with Muslims. That is followed by a question and answer session. Maulana believes that engaging with the community and neighbors is just as important as development within the community.

Maulana Rizvi has spent many years educating people about the Khoja community and our faith. He has given lectures and tours to many students, and often takes part in interfaith discussions, appearing on television or newspapers. He hosts hundreds of people every year, such as police recruits, committees or agencies from the York region.

An award of recognition

The ISIJ thus has a great relationship with the York Regional Police Force and was invited on 5th November 2019 to join the Force to celebrate this relationship. Maulana Rizvi attended this event along with Vice President Br. Shafiq Ebrahim, the Director of Operations Br. Muntazir Jaffer and the Facilities Manager Br. Shabbir Rashid.

At this event, the ISIJ was honored for its many years of partnership in enlightening over 1500 officers of the York Regional Police about Islam and our practices. Maulana Rizvi received the award on behalf of the ISIJ of Toronto from the head of YRPF, Chief Eric Jolliffe, for contributing to community awareness within the police force and the region.

The efforts of the ISIJ of Toronto to promote cultural understanding and awareness between their community and the York Regional Police Force is a great example to Khoja communities around the world. It shows the value of educating non-Muslims about our faith, and the benefit of reaching outside our community. The Toronto Khoja community should be proud of these achievements.

You can read more about the Jaffari Community Center here. 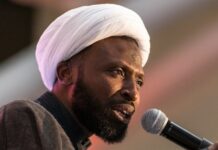 A heart-warming organisation handing out “Winter Warmer” clothes and hygiene packs to rough sleepers in London is raising funds for its next big project. Hand...

Latest international university scholarships – they could change your life! Looking for scholarships at universities abroad? The following links offer a huge range of...